Ginger Gaines-Cirelli and Clayton Childers teamed up on October 29, 2019, to offer a Day of Learning at Edenton Street UMC on Sacred Resistance and Moving from Charity to Solidarity.

Ginger Gaines-Cirelli took the lead in the morning and led a session based on her recent book, Sacred Resistance: A Practical Guide to Christian Witness and Dissent.

Participants explored the theological and biblical grounding for the daily practice of sacred resistance, and considered how, as those formed in and by relationship with Christ, our very being is turned toward God and resists all that is not God.

With a mixture of wit, humor, and hard questions, Ginger guided participants to look at how this posture helps us live with integrity and courage during times of acute injustice, inequity, and crisis as well as in the ongoing context of empire.

In the afternoon, Clayton Childers offered a practical guide to how congregations can move beyond simple acts of charity into other, more lasting forms of caring for our neighbors. Participants considered the missions their churches were already engaged in and categorized them according to the fourfold model of charity, mutuality, advocacy, and solidarity.

While all four types are needed and can be “good,” Childers encouraged participants to embrace a model of caring that focuses on root causes in order to change the broken systems that force people to live lives of perpetual poverty. 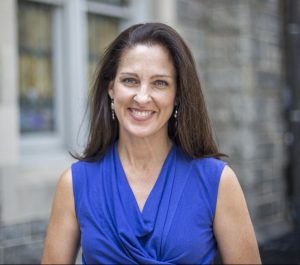 Ginger E. Gaines-Cirelli is a life-long United Methodist who is passionate about sharing the good news of God’s liberating love in Jesus Christ. In 2014, she became the first woman to serve as Senior Pastor of historic Foundry UMC in Washington, DC. Since her appointment in 2014, in addition to continued advocacy for LGBTQ justice and inclusion, Foundry has re-energized its work for racial justice, become a founding member of the Sanctuary DMV movement, created a Sacred Resistance Ministry Team to mobilize consistent action in response to troubling current events, and exponentially multiplied discipleship opportunities for all ages.

Ginger has served a variety of congregations: small and large, urban and suburban. In all of these contexts, her ministry has encouraged spiritual growth and engaged discipleship—emphasizing radical hospitality, shared ministry, spiritual practices, and solidarity with the poor and oppressed. Her book, Sacred Resistance: A Practical Guide to Christian Witness and Dissent, was released in May 2018.

Clayton Childers is a Christian educator committed to connecting faith with positive social transformation. For seventeen years he has served as Director of Conference Relations for the Board of Church and Society, the international public policy and social action agency of the United Methodist Church. He holds degrees from Furman University, Southeastern Seminary, and Candler School of Theology at Emory University. Prior to coming to Washington, D.C., Clayton served for 11 years as a United Methodist pastor in South Carolina. In his current position, Clayton has traveled widely, leading training events in 45 of the 55 conferences in the United States and in 25 countries beyond the US.